ABOUT CAYUGA COMMUNITY COLLEGE
OUR MISSION, VISION, VALUES, AND THEMES

We are Cayuga Community College, dedicated to providing students with diverse learning opportunities to discover their passions and advance their personal and professional growth. 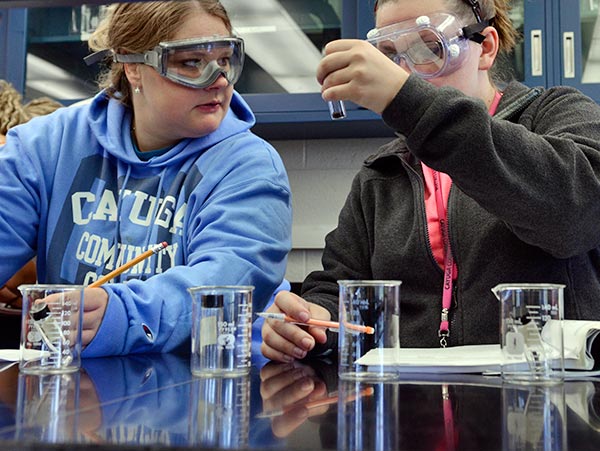 In pursuit of our mission, we value:

ENGAGEMENT, by focusing first on student success through collaborative learning, individualized attention, and a supportive environment.

INTEGRITY, by working each day guided by standards of excellence to meet the mission of the College and the needs of our communities.

RESPECT, by treating each member of the college community with compassion and dignity, celebrating our diversity and encouraging trusting relationships.

COLLABORATION, by working together and supporting one another for the greater good of our communities.

Cayuga Community College, a unit of the State University of New York with locations in the cities of Auburn and Fulton, is a two-year community college sponsored by Cayuga County and governed by a 10-member Board of Trustees.

Committed to being the community college for both Cayuga and Oswego counties, the College offers transfer and career-oriented curricula on a degree and certificate basis through day, evening, Sunday, online, and summer sessions. For groups such as high school seniors, government agencies, retirees, and industrial, business and professional personnel, the College also offers credit and credit-free specialized instruction according to need and interest.

The Auburn campus is located in the seat of Cayuga County in New York State’s Finger Lakes Region. The Fulton campus is located in Oswego County, just 10 miles from the southeast shore of Lake Ontario. Both locations offer a blend of rural and urban cultures with a rich variety of recreational and cultural opportunities including museums, parks, and theatrical and musical venues. The cities of Ithaca, Syracuse and Rochester are an easy drive from either location.

The Fulton Campus, which originated in January 1994, has occupied a few different locations over the years. From 2001 to 2012, classes were offered in 50,000 square feet at the Broadway location. In the fall of 2012, the campus was relocated to a larger location at River Glen Drive. This location offers classrooms and labs, student space, offices, and has much more. The Fulton Campus has “branch” status, meaning degrees can be completed entirely in Fulton.

SUNY, the State University of New York, is a comprehensive public university system consisting of 64 campuses that provide a full range of educational opportunity across New York State. The educational, cultural, and economic impact of the SUNY system is felt not only throughout the state, but nationally and worldwide as well. The 30 locally-sponsored two-year community colleges operating under the program of the State University of New York offer degree programs that serve as job-entry educational experience or provide transfer preparation for a baccalaureate degree at a senior campus.

Approximately 50 full-time and 177 part-time instructors make up the Cayuga faculty. Cayuga instructors hold advanced degrees from universities across the country, and bring a broad range of professional experience from the academic world and beyond. The hallmark of the faculty is dedication to students. In student opinion surveys, Cayuga instructors consistently earn positive reviews for their competence and commitment. Members of the Cayuga faculty have earned dozens of awards and citations for educational excellence, including several SUNY Chancellor’s Awards for Excellence.

Students choose Cayuga for a variety of reasons. While many students pursue a degree or certificate, a significant number take courses for other reasons: to gain specific job skills, explore an area of interest, pick up courses needed for a degree elsewhere, or prepare for transfer to another institution. With all of these goals in mind, Cayuga provides academic support, financial aid, and other resources to help all students with their educational progress.